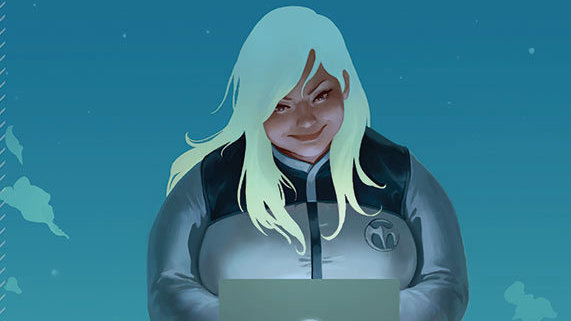 Faith Herbert, also known as Zephyr (sometimes also known as Summer Smith) is a superhero in the Valiant universe. She's not a new character - she's been around since the early 1990s - but has just (well, about a year ago) gone solo in her own series, written by Jody Hauser and drawn by Francis Portela. Here's the blurb from the first issue of Faith:

When a car accident left her orphaned, Faith Herbert was raised by her loving grandmother and found comfort in comic books, science fiction movies, and other fantastic tales of superheroes. In her teens she would discover her fantasies were reality when it was revealed she was a psiot – a human being born with incredible abilities. Imbued with a telekinetic ability to fly and a companion field that allows her to physically move objects, Faith joined a group of fellow psiots called the Renegades to stand against the forces of evil. She’s since left her Renegade family behind to take on the world’s challenges on her own. She may have a lot to learn about the superhero game, but if there’s one thing she’s always had, it’s... Faith.

So Faith has moved to Los Angeles to start anew. She creates an alter-ego for herself (Summer Smith) and gets a job creating listicles and quizzes for Zipline (the Valiant Universe's version of Buzzfeed). Some evil force is kidnapping potential psiots, and it's up to Faith and her sidekicks (Archer - an archer, and @x - a hacker) to find out who and stop them. That's pretty much it, as far as the plot goes - enjoyable enough, but nothing to stretch the imagination too much.

However, where this title really shines is with Faith herself. She is a great character - a likeable, engaging, capable, optimistic, nerdy badass fangirl (her Summer Smith pseudonym comes from her love for Buffy and Dr Who). And did I mention that Faith is a fat person? Neither does the book. It is really refreshing to see a fat female superhero not apologising or worrying over her weight. There are no rude jokes, no teasing. Faith is fat, but is not defined by this.

Weight and body type are not Faith’s story.

These are the elements that make-up Faith’s story.

From "Comic Love: Having FAITH" by Jessica Boyd, Feb 2016. comicosity.com 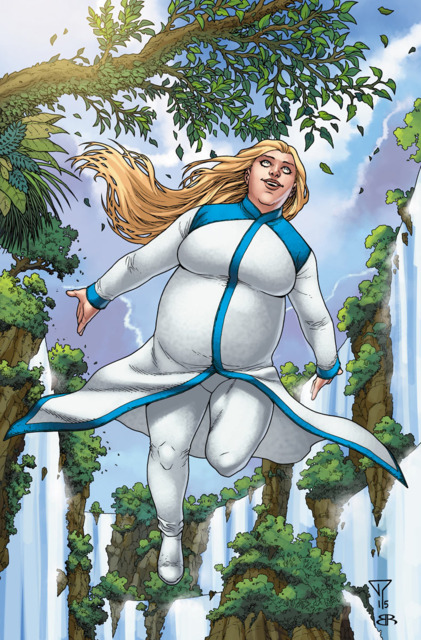 There have been several interesting articles in the mainstream media about Faith's fatness, including at  NPR, The Guardian, and The Atlantic. And while I'm dishing out links, here's an interview with Faith author Jody Houser.

I really like Faith, and I look forward to reading more of her adventures - a new series of Faith comics is currently underway (issue 9 will be coming in March).

I got a copy of Faith as an ARC (advanced reader copy). I mentioned ARCs last week too, so I thought it might be useful to talk about what they are and how you can get your hands on some of these pre-published pearls yourself.

Publishers send ARCs to reviewers and librarians before a book is released to help publicise them. In times gone by these would be physical books, usually with a not-finalised cover design and bigger spaces between lines of text (for reviewers to write notes). While you can still get hold of physical ARCs (see below), digital is much more prevalent these days. Here are a few places you can go to apply for some eARCs:

A couple of things to note about eARCs:

Here are a few places you can go to apply for physical ARCs:

Let me know in the comments if you know of any other good sources of free books!