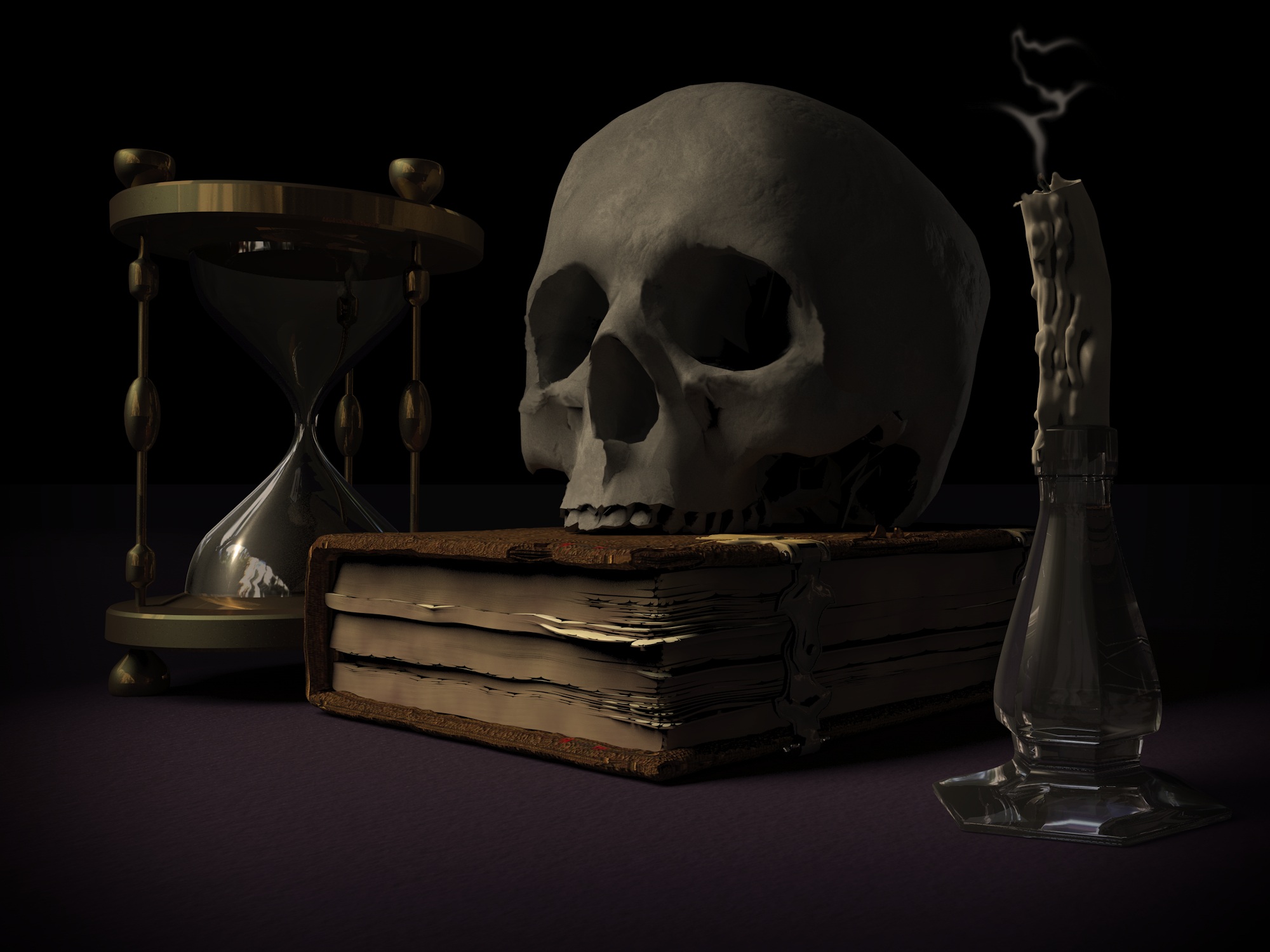 The days are getting colder, the nights are getting longer, the leaves are turning and the shops are full of pumpkins. Which can only mean that Halloween is here!

To celebrate, here's a short, creepy library-set story I wrote a couple of years ago while taking part in the FutureLearn/Open University MOOC, Start Writing Fiction. The idea started - as many of the best do - with a bad pun.

It was a cold but dry night, which was fortunate. Autumn rain has been known to turn us into hermits on book group evenings. There were no parking spaces nearby, so we walked the twenty minutes to the library, hands deep in pockets, stopping only to kick at piles of freshly raked leaves at the end of driveways - I can never resist - and to stick my tongue out at the disapproving snarls of the watching jack-o'-lanterns.

‘You do realise that Helen will give us the evil eye all evening,’ said Chris. ‘She hates it when people come without reading the books.’

‘Oh, you know her. She's never happy unless she's unhappy. And I think she secretly enjoys making us feel like naughty children!’ I laughed, and sent more leaves into the air. ‘Why do we put up with her?’

‘Come on, Shai, she's not that bad,’ said Chris. ‘And besides, I doubt the rest of us would be organised enough to run it without her,’ which was true.

‘Last again, darlings!’ It was Eve who opened the door - our excuses could wait a little longer. After the regulation hugs, kisses and how’ve-you-beens, we went into our corner of the library and repeated the process with the rest of the group. Not a bad turn out this evening - twelve or so, including a couple of new faces. When we got to Helen, I took the tiniest of steps backwards while Chris gave our excuses. Helen's mouth became a thin, straight line.

‘This is the third time you've come to a meeting to talk about a book you have not read,’ she said.

‘It's not just a book club, though, is it?’ I said. ‘It's a social thing. You are all our friends. We enjoy spending time with you.’

‘If you want a social evening, organise one yourself, Shai. This is a book group. We are here to talk about books. That we have all read.’ Helen's eyes made the same thin, straight lines as her mouth. Chris gestured apologetically as we retreated to our seats.
I find it disconcerting being in the library after hours. I feel like I'm in an after-image, a shadow of a library. While it's empty, the books on the shelves sometimes feel like they are still being read. It's a difficult sensation to explain, but it's like when you can just tell when someone is looking at you.

‘Has anyone heard from Mike or Kerry recently?’ asked Anita. ‘We haven't seen them for months.’

‘They shan't be coming back,’ Helen said sharply. ‘Now, to begin.’

‘But I haven't heard from either of them for ages,’ Anita continued. ‘Has anyone?’

There was a lot of murmuring and shaking of heads. I tried to think of the last time I'd spoken to Kerry, but I couldn't remember. In fact, trying to conjure her up in my memory felt like trying to remember a minor character in a forgotten book, long since read.

‘What about Michelle?’ asked Nitesh. I'd forgotten all about her. And it had only been . . . How long had it been? I felt like I was grasping at shadows.

‘If we can please begin,’ Helen said, loudly and sternly. The hubbub of the room dropped away sharply. ‘Thank you. So, Saran, what are your initial thoughts on the character of Flora?’

‘I’m glad I didn't read it,’ Chris said to me after the discussion. ‘It sounded a bit silly.’

‘I'm intrigued, actually,’ I replied. ‘I might read it tonight when we get home.’

‘Shouldn't we get started on next month's book to keep Helen off our . . .’

‘Helen!’ I interrupted, as she approached. ‘What an interesting discussion. I think . . .’

‘Never mind that,’ she said with a cutting primness. ‘I need to speak to you both after you've said your goodbyes to the group.’ She picked up her bag and disappeared into the fiction aisle while we exchanged hugs, kisses and all-the-bests with the others, until the library descended into its traditional silence once more.

‘Helen?’ Chris called. She didn't respond, but we found her on her knees, facing a shelf of books, eyes closed.

‘Is she meditating?’ I whispered to Chris.

‘Helen? You wanted to speak to us?’ Chris said softly. She didn't respond. The silence enveloped us, and I felt claustrophobic. Chris and I exchanged glances. ‘Come on, Shai. Let's go.’

‘You will stay here,’ Helen muttered.

‘OK,’ I said slowly. We waited. Helen was quiet and still once more. ‘Look, Helen, it's getting late. We're sorry we didn't read the book. We won't come along in the future if we haven't . . .’

‘You will stay here,’ Helen repeated. ‘You shall not leave.’

‘No offence Helen, but this is getting a little creepy,’ Chris said. I elbowed Chris and shook my head. I didn't think that was a wise tactical move. Helen began muttering something - no, she was chanting now - and started rocking on her knees. We tried to back away, but our feet were rooted. I looked down and saw our unread books open on the ground in front of us, their pages flapping with increasing violence. Chris grasped my hand. Helen chanted louder and rocked faster. Her hair flew wildly around her face.

There is nothing to do but read, now. I occasionally sense the others, but their forms are vague, like shadows. I don't know how many others are here. I don't know them like I know Chris, who’s presence brushed past mine recently. I think it was recent, time is hard to gauge. The only marker I have is the monthly book group. Autumn rain doesn't keep me away, but I am a hermit, lost in a book.

‘Has anyone seen Shai and Chris recently?’ asked Eve.

‘Which ones were they?’ Nitesh furrowed his brows and tried to summon us from the edges of his consciousness.

‘They shan't be coming back,’ Helen said sharply. ‘Now, to begin.’

This work is licensed under a Creative Commons Attribution-NonCommercial 4.0 International License. 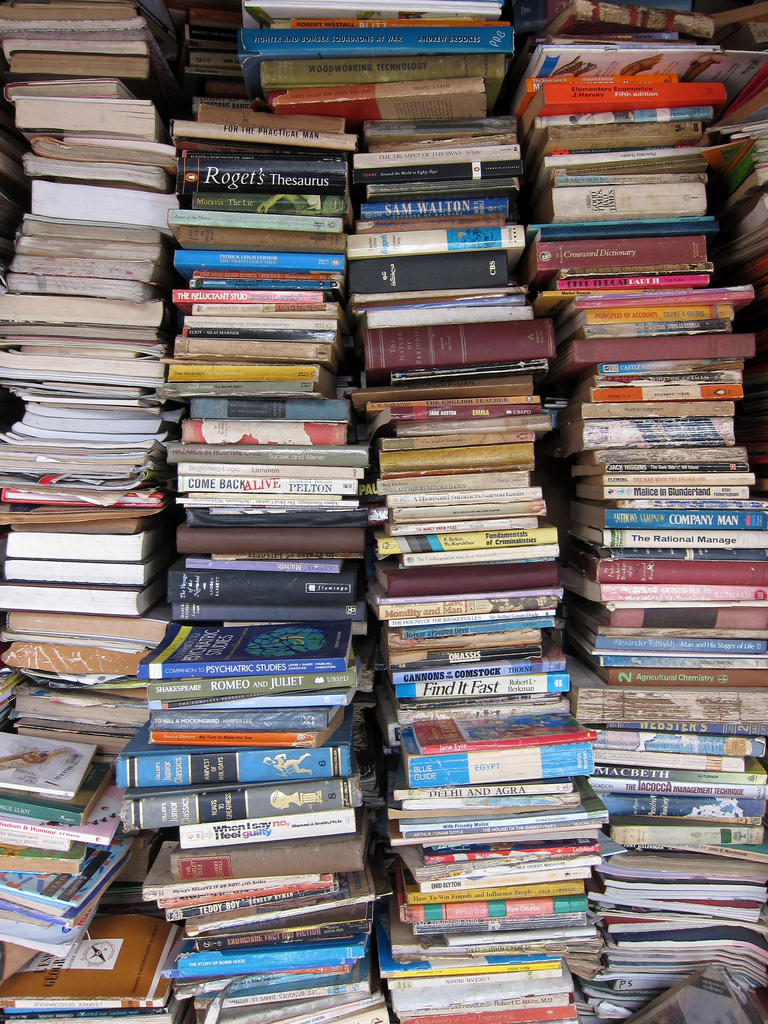 The Booklender and the Teetering TBR Pile of Doom